This post came from an assignment in my Fren 2120 class during fall semester 2013. Students practiced relative pronouns through poetry modeled on Jean Arceneau’s 1998 poem Je suis Cadien. This poem recounts the history of the Cajun people, from emigration to Acadia, through forced immigration to Louisiana, and to the challenges of assimilation into contemporary American culture. In composing a poem inspired by the Cajun one, students meet the ACFTL standards by making connections and comparisons between the experiences of the poet’s people and their own lives. Of the class, two students’ poems stood out as capturing the emotional complexity of being caught between two cultures that formed the focus of the poem we read in class. There are some grammatical mistakes (that I have not corrected here) as these students were only a month into their 4th semester of French, but even at that linguistic level, they managed to emote through their poems. The two poems are reproduced with the students’ permission below.

(junior – just returned from study abroad in Senegal, decided to incorporate ideas of migration from rural areas to Dakar) 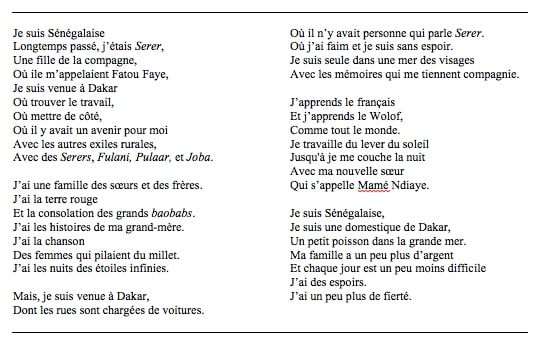 Assistant Professor of French at the University of Central Oklahoma, Department of Modern Languages. This site serves as a teacher resource, student resource, pedagogy blog, and my professional portfolio. View all posts by jessicajappleby